I finally got to go on a local photo outing with a group called "Photowalk Utah" I have been trying to get to their meetings for, oh.... a year or so.... Finally had one coincide with a day that I could just take off and do it.

While waiting for everybody to get there and go in, we were stooging around outside, taking desultory warm-up shots mostly. I love these gargoyles but telephoto from the ground doesn't do them justice. If could get up on his back with a fisheye lens........ hmmmmmm 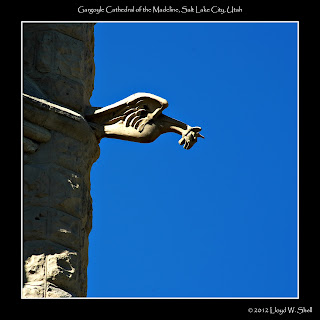 One thing I love about Catholic Cathedrals is the ornateness and detail in the decoration. That and the organ pipes. Got both of them in this shot. I was trying something a little different, I took my whole kit, but tried to shoot most of the place with my DFA 100mm WR Macro lens. A) because it is my best and most expensive lens. and B) because I wanted to push my comfort levels a bit. I usually go ultrawide and for drama, but I wanted to look more at details and juxtapositions of objects and textures. It was a neat experience. Due to the number of photographers going UWA would have been hard, so having a narrower field of view helped with that. (My people in photos aversion is getting concerning though) More than avoiding the distraction of composing around other photographers, using such a tight FOV forced me to make choices about angles and backgrounds that I normally think less about. I don't usually see in tight focused shots. 24mm on APS-C is where I tend to live. I really hope that Pentax brings out a 24mm f2.something that is built just like the DFA 100 WR, screwdrive is just fine and the look and build of the lens is nothing short of magnificent. 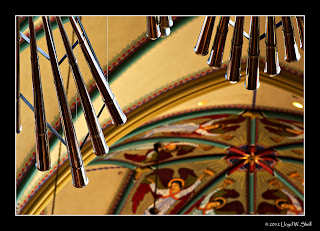 Sometimes I get a little too finicky about lining things up perfectly but symmetry when achieved is awesome. I think I got this pretty close. This type of shot is where the older pentaprism 35mm viewfinders made life easier. The one on my K200d is a bit of a tunnel. Of course if I had $10,000 I could get the 645d and just blow my own mind. 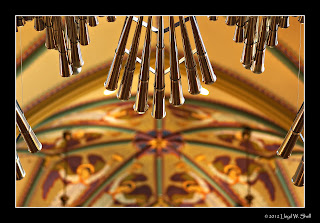 I had a bit of trouble getting the focus spot on at f2.8 so I stopped down to f5.6 for this shot. I think there are certain distances that this lens does better at than others. f5.6 is supposed to be the peak of sharpness and the candle stick is certainly crisp. I was hoping for more background blur but I think there is just enough here to achieve what I wanted. 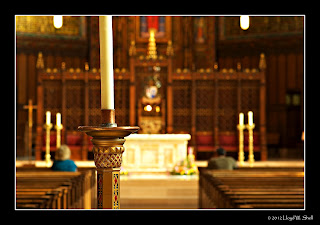 Back to those dang pipes again. 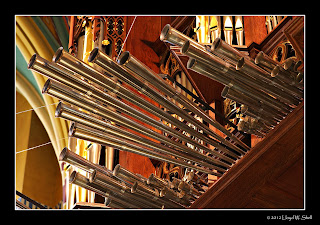 Details, when I was just about to switch to a different lens I decided to try harder. Glad I did, it is good to stretch yourself, and though this is not some kind of earth shattering photo, it pleases me. The geometry works and the colors too. 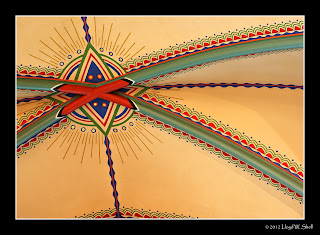 Sucker for softly lit marble. And this has some nice marble to light! 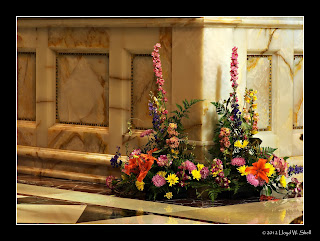 I fiddled with these candlestick holder bases for a long time. Getting enough in focus at f2.8 requires very careful focus placement. I wonder if people thought I was crazy taking that many pictures over that length of time. 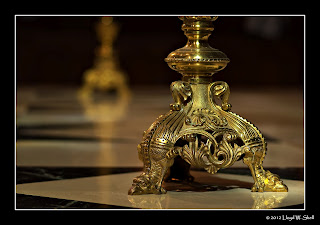 I am not totally sure if this photo works or not, but I loved the juxtaposition of elements and the color of the statue. 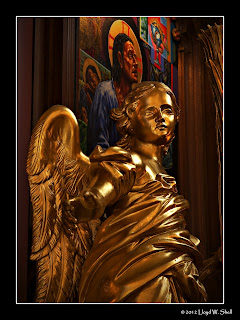 Stained glass is of course a big part of cathedrals, I'm a sucker for that stuff too. It is easier to shoot digitally than on film though.... 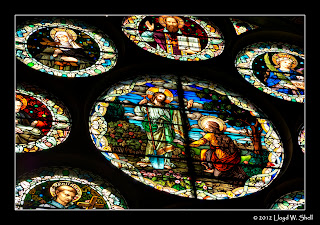 Continuing to work on the concept of  isolating details I produced a busy shot with a blown highlight that I love for no particular reason at all. So you get to look at it too. 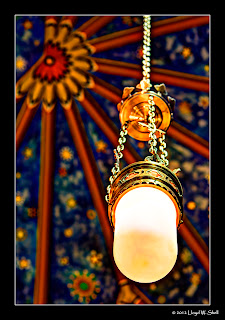 My original concept of this shot just didn't work, I wanted f2.8 and to really blur the background, but I just could not get enough of the wood in focus to make it look good. So going completely the opposite way and stopping down to f13 also got me a pleasing shot. 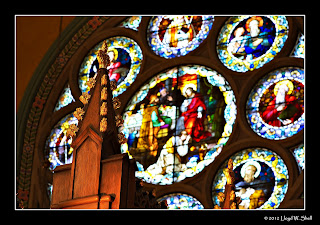 Time to switch to another lens. I made sure that I included my old Manual Focus K28mm f3.5 which is a "normal" lens on APS-C. Being normal is not a big priority of mine, but I struggle to get a handle on this focal length but with the results this lens can produce I think I really need to get it working for me. 3 bracketed shots, blended, leveled and slightly cropped. YEOW! The starbursts from the aperture blades were a nice bonus too. 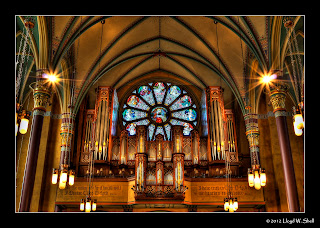 Going ultrawide now, like I would normally have done from the start gives me a completely different perspective. Love the wooden floors! 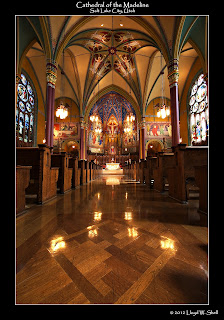 Not satisfied with this shot, somehow shooting the exterior of this building has yet to work for me... Good! More opportunities to grow! 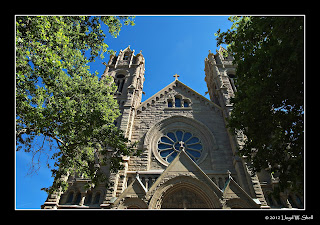 Part of why I haven't been blogging as much is that.... well.... we moved. 2 miles away. Not a huge move but one that we are very excited about!

We kept a good view of Mt. Timpanogos. 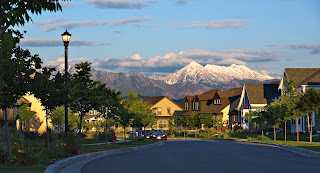 And our home is just Fabulous!!!!! 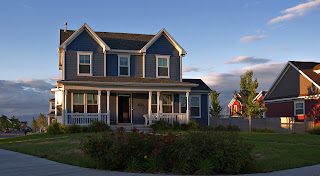 We are closer to the lake, and beautiful scenes like this: 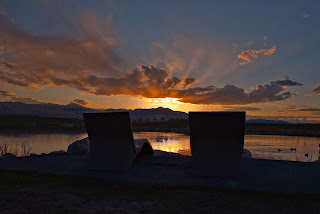 And this: (This is a slightly more accurate color to the sunset, but the one above just makes me happy! 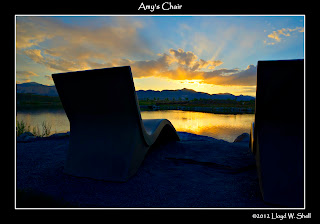 This is my littlest on one of our docks, I had to really work to get some detail on her against that bright sky. Thanks heavens for layers, much easier than in the days of darkrooms. 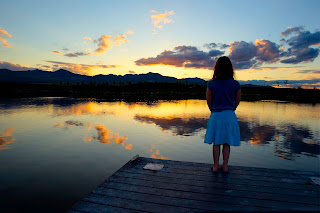 As a technical accomplishment this is something that I am quite proud of. Multiple HDR exposures, fused in photomatix and stitched in Photoshop Elements. All shot HANDHELD at ISO 100. Hmmm...... me likey!

I have a bunch more shots I have been taking on assignment for a local realtor and the master planned community I live in. Once they cull through and buy what they want I will post a selection of the ones they didn't.
Posted by Lloyd at 10:14 PM No comments:

Alrighty, I know that flower pictures are the first refuge of the beginner photographer, but I still like to play with taking them, it makes living through winter to spring worth it.

I just try to make mine a little better than the average shot. I don't know that these are any better but considering I was shooting semi macro handheld with a slight breeze but I will take anything that is vaguely sharp!

Peonies are a special favorite of my mothers and she does a fantastic job of growing them. this variety that is pink on the very outside and a creamy white on the inside are a particular favorite of mine. 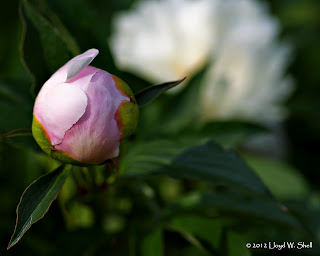 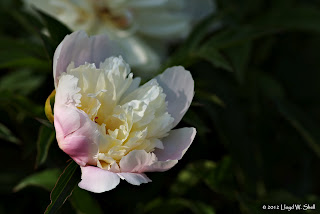 Iris are another well done flower at my parents home. I have always been fascinated by the shapes and textures of these flowers in their all too brief period of beauty. The little fuzzy bits in the middle of the leaves particularly delight me. 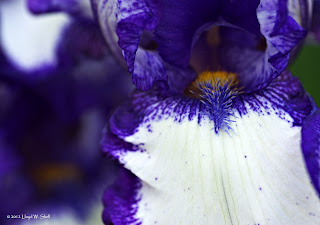 For some reason this type do this, a good one next to a weird one. The color is my favorite though, that darker red/magenta reminds me of Rubies for some reason. 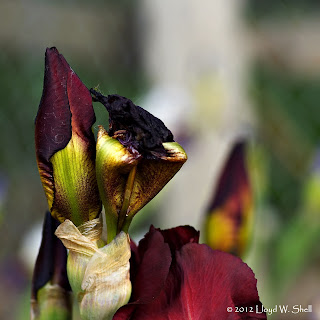 This is a patented shot for me, I just LOVE the look of these when they open up. I just do. The shapes just do it for me. 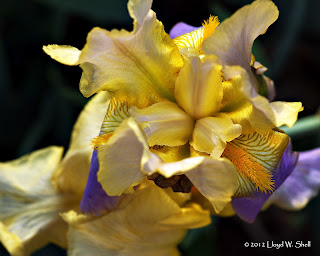