Pretty much everytime I work at the University I go past this place on the train, or driving. I usually pass by with a "I'd like to shoot that someday." in passing but never stopping in.
This day was different, figuring I had missed my bus I decided to take a few minutes and try some initial shots to see what I have to work with. Then wander and catch the last bus. For those of you who care I did end up making the bus I wanted it was running late and I saw it as I was walking up the street to find other things to shoot.
So here it is, The Salt Lake City Library. (As always click on the photo and it will link you to a larger version, which is usually much more enjoyable.)
The first thing that strikes you is the open and airy lobby, jutting stairways, and glassed in elevators. 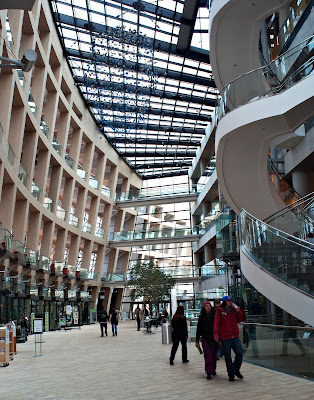 While this is more disturbing to look at, I like the confusion that the tilt added, and the pronouncement of the bulbous stairways jutting into the space. 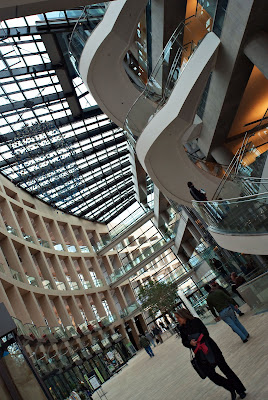 From above the curves become more apparent and the openness invites enjoyment of the space. 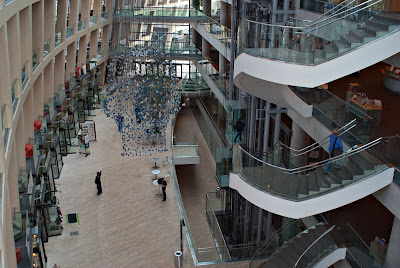 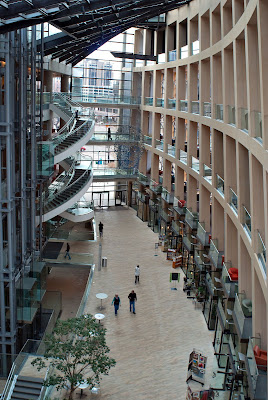 To me, the most elemental design piece of the building is the juxtaposition of gentle curves and rigid lines and angles. It speaks to me the most in these stairs. Going back to the first shot, they seem to burst into your awareness with a sensous curve pushing out into the openness above you. But upon closer examination you see that they are truly more hard edged than originally perceived. This photo speaks to me of this dichotomy that exists in this building, and in all of life and nature too. Nothing is truly straight and simple or purely for ornamentation, it all has a purpouse of some kind. 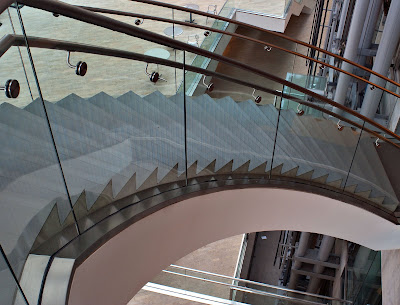 Friday was a good day. I got to play on my way home from work, and then again after dinner. AWESOMENESS!!!!
One of the frustrations of being a landscape photographer is that you cannot schedule the light/sunset/clouds etc... you simply have to have places in mind that you would like to capture and simply be ready to drop what you are doing, grab your camera and run when the time is right. Oh, and be lucky. I wasn't so lucky with the sunset, the expected color really didn't come, but I still tried to get the best captures I could get. Here they are in reverse order.
As is my usual wont when photographing Temples this is a HDR, 6 shots in 1 stop increments from +3 to -2. I knew the color was not there and planned this as a B&W from the start. I think I captured the feeling/mood I wanted, but I think my focus was just slightly off. Still like it though. 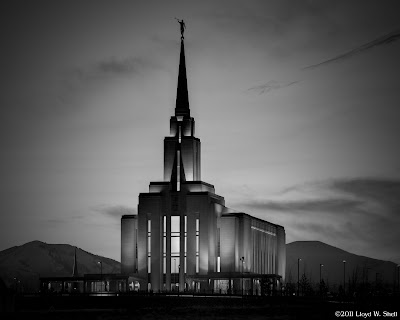 This was earlier as I was getting set up and waiting for the sun to go down. I really thought it would be a throwaway shot, taken to check my composition, however it grew on me a bit. It is not sepia toned, that is the color as captured at that time of night. 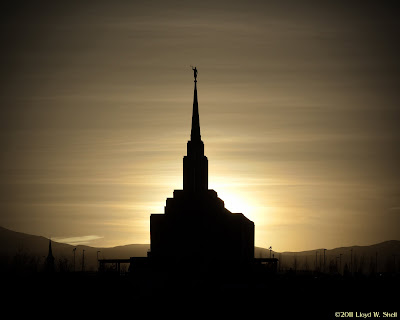 This is the earliest shot, It is an homage to an online friend named Phil Zucker, who likes to do multiple shot self portraits like this. My first try, learned a lot, don't be surprised if you see more of these!