Apparently I sorta missed the point of the Mega Moon thing, according to my wife, I went to a lake above 10,000 ft and used the moon to illuminate things rather than as the subject of my photos. I don't care so much, as you will have seen in a post higher up on the page but written after this one, I did indeed shoot the moon the next night and got some awesome shots too!

Back to the high lake, Mirror Lake in the Uinta National Forest, a beautiful spot, and one I went to many times with my family as a child/teenager. I have been wanting to take a long exposure photo of Bald Mountain reflected in this lake, originally with star trails and long long LONG exposure, but I am just getting too old to sit in the cold for that long. It is never hot up there at night.

Well, I set up at the spot I wanted to, found a canoe there!!! Perfect! And sat down to wait for the right light. The sunset was nothing, but the light got good, and the fishermen came out to see if they were biting. The fish were indeed. I was amazed at how still these folks stood, these next several shots range from 15-30 seconds, and the fishermen was remarkably still. I wish they would email me, I would LOVE to get copies of these shots to them. 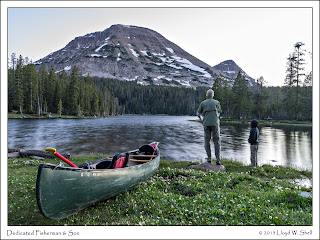 Not entirely sure what I messed up with the White Balance, but the colors shifted due to the light and the weirdness of the photographer. I like the shot above, it looks warmer in tone, but the bottom one reflects reality more. 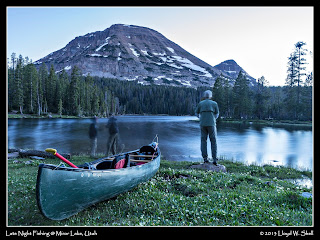 As it got darker, and the lake smoother, It still wasn't quite the right light. So, I took a nap. 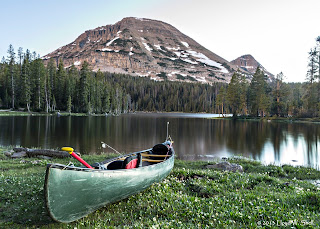 Even later the sky was getting perfect, the moon was coming up, but the lake was just NOT calming down like I thought it would. I was getting a little frustrated and more than a little cold! 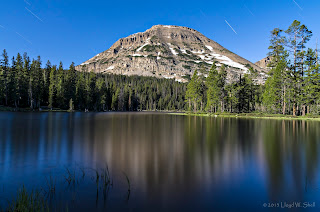 Finally, finally FINALLY, it got calm, I got the shot I wanted and I ran away. I don't know that it is as cool as I envisioned, but I still like it because of the effort involved in getting it! 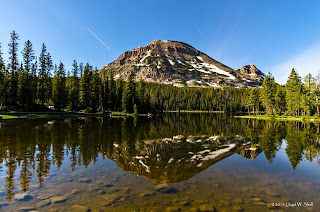 Greetings! Been awhile, hasn't it? Sorry for those of you who come regularly, I will be trying to catch up on the last two months. It has been a busy summer. Trip to Oregon, and a trip to Texas, a BIG engagement photo shoot, and wedding invitation design session. Lots of good things going on.

So... June... I spent a few evenings checking out new vantage points I have not tried yet. I think I am getting somewhere. I need to wait for the right sky for this angle, but it just may be worth the trips and wait.

This is a HDR, the sky was just too bright. I ended up emphasizing the different colors of lights due to the increase in saturation that comes from HDR. Nee to re-visit this at some point and try for something a little more unique. 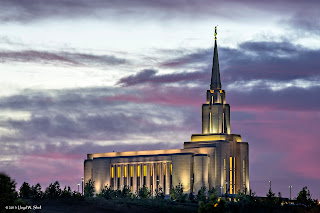 The weekend of the super moon was a busy one, I again went to shoot the temple for yet another new angle. I wish the moon had been higher. 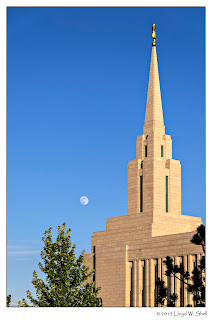 The overall appearance of this shot appealed to me for several reasons. One, it demonstrates the capabilities of a newer lens (K200mm f2.5), and it is just simply gorgeous! Yeah, I'm biased. 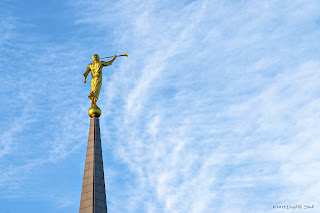 There is a type of temple photo that is quite popular, the sepia toned, fake aged/scratched negative plug-in that takes a mediocre shot and makes everybody buy it. If you haven't seen it don't bother looking, they are really not all that good to my mind. This is as close as I will come to that. A lot of processing went into this shot, at least for me. Desaturation, and low opacity layer with a cloud rendering, vignetting. I like the result, a lot actually, it is soft and contemplative. Just not quite like my usual shots. 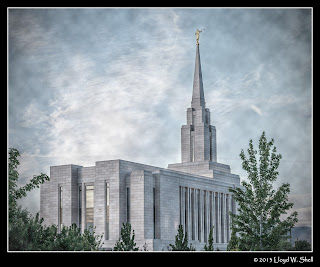 Slightly shifted vantage point,  more of my usual HDR processing. Really love the colors on the mountains behind and the delicate sky. On canvas it would be perfect!!! 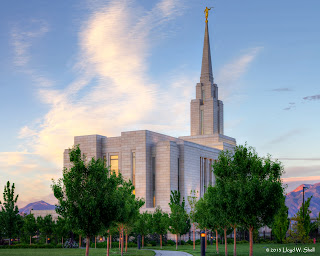 Shot long enough for airplanes to go by and the clouds to move. I like this one the least, which means that I would probably sell more of it than any other!!! 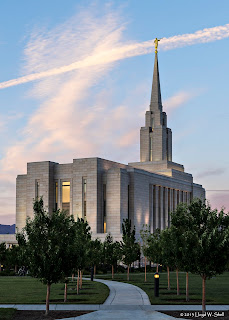