Nothing especially technical about these shots. Just my usual night light work. Thought they turned out pretty well though. 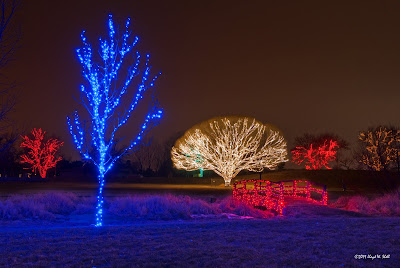 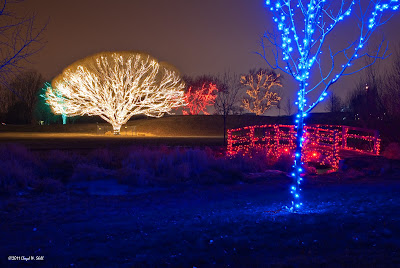 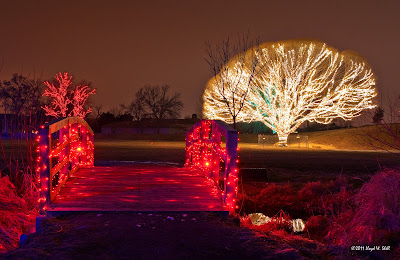 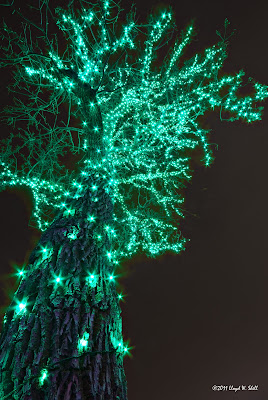 One of the most beautiful places to visit during the Christmas Season in Salt Lake City is Temple Square. A great deal of money is spent, and countless man hours as well, making the light display one of the most magnificent anywhere. At least in my opinion anyway.
I try to get downtown every year to take some photos and enjoy the ambiance. Some years have snow, others (like this one) are mostly barren of snow. I prefer the snowy day clearing at sunset weather but seldom get it. This year was cold, and hazy, but not enough to impact the photos. Though, the drive home was a bit scary due to some foggy patches.
I took my usual "Full Kit" Consisting of my K200d (without battery grip for more solid mounting on my tripod's QR plate) Cable Release, Rokinon 8mm f3.5, Sigma 10-20 f4-5.6, Sigma 17-70 f2.8-4.5, Pentax DA 55-300 f4-5.8, and my Pentax DFA 100mm f2.8 WR Macro. I really didn't need the Fisheye, but I like to have it around if an interesting composition comes up. I also, of course, had my trusty Induro Tripod and Vanguard Ball Head.
My intent this trip was less shooting what I have shot before, but looking for a slightly new angle or composition. I have shot here many times before so it is easy to get stale.
This first shot was from the plaza of the Conference Center that sits north of Temple Square. I was trying for extreme depth of field so I shot at f16 with the lens set at 53mm, and an 8 second exposure. (Hint to all those folks running around with their DSLR's set to the highest ISO and the pop-up flash raised. Bring a tripod... it makes your shots look a LOT better. Trust me. 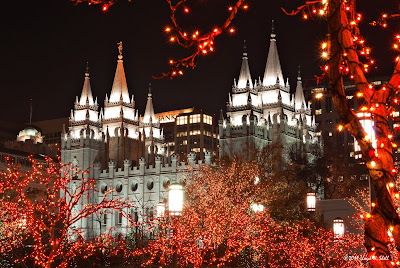 I had several spots picked out before I went that I wanted to try for, this one didn't quite turn out as I had hoped. One day I will get a nice sunset and then have to stand around until the turn the lights on afterwards and composite it together. Till then this will have to do. 19mm f9.5 2s. 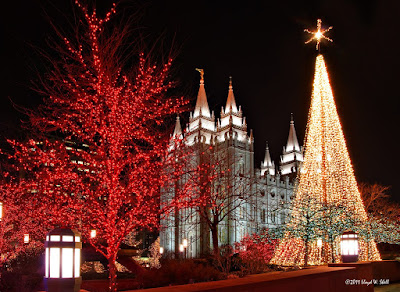 I really liked the symbolism of a tree of light in front of the Lord's House, I am almost afraid that the tree dominates too much on this shot. 21mm @ f11 and 2s. 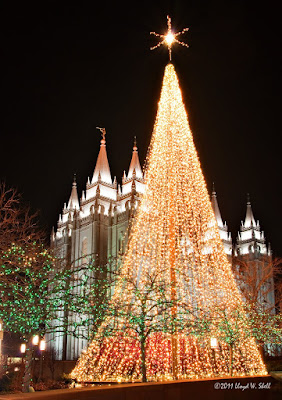 This was a quite tough shot, the lighting on the statuary is much brighter than the lights in the trees. I ended up bracketing +2,0,-2 and blending them in Photomatix. I do wish I would have gone for at least a -3 or 3.5 to give me a little more detail on Mary and Joseph in the highlights, but overall I pretty much achieved what I set out to get. 48mm @ f9.5 Multiple exposures. 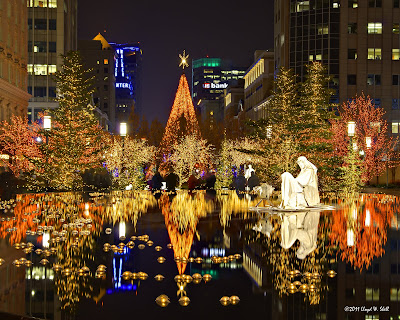 Another HDR from the opposite side of the reflecting pond. This shot shows where there is a lot of value in closely looking at your composition. I ended up just cutting off the top of the trees reflection in the pool. It would have taken very little maneuvering to get just a little more height and include that.... sigh.... 53mm f9.5 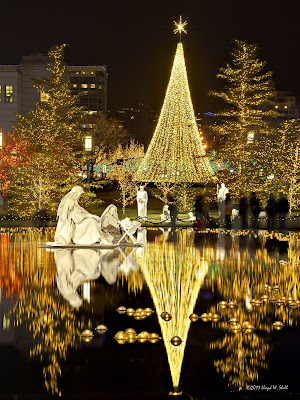 When I did my survey trip right after thanksgiving, I desperately wanted to include these red trees running east from the temple. They add just the right touch. The difficulty lies in the perspective distortion from the angle. I am not entirely satisfied with the look, I always notice things not being level, this is level, but it doesn't look it. The slight tilt up and the lens pointing just to the right of the temple combine to make it look akward. Need to work on it. 19mm @ f9.5 and 2s 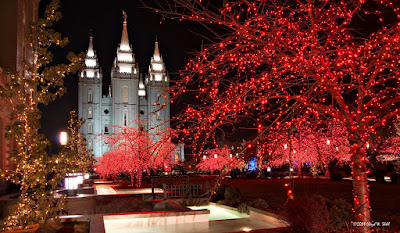 Strangely this is right up there as one of my favorite shots ever taken on Temple Square. For some reason these bag lights really held my attention, and I really wanted to capture them. At larger size the texture of the paper and the holes in the bag just warm my heart. I LOVE this shot. 100mm @ f4.5 and 1/8s. 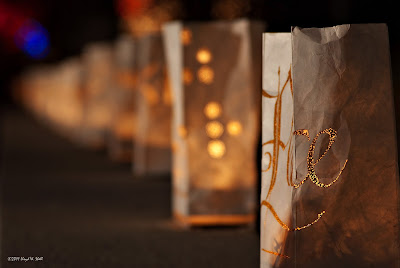 You may be wondering..... why did he just repost the same shot. Fooled ya! Sorta, same shot different aperture, which changes the look of the background significantly, shot a f6.7 and 1/3s, the out of focus areas are more sharply defined and more detail can be had deeper into the photo. I like the first one simply due to the background being smoother. I sorta wish I had shot one at f2.8 and really blurred the background... 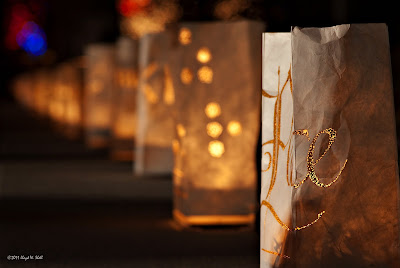 I think this is a better use of the red trees and water feature, with a longer focal length the distortion of the temple seems less, plus I like the composition a little more. 28mm @ f6.7 and 1s. It is sharp enough though I do wish I had stopped down another stop or two. There are subtle changes in the shadow and highlight detail with a longer exposure and smaller aperture that are pleasing to my eye. 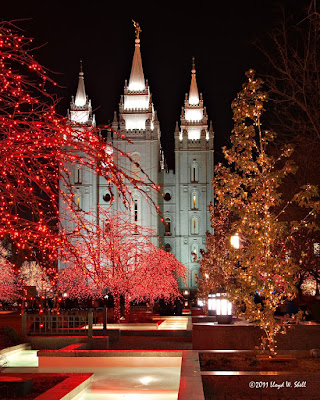 This is a favorite angle for me when there is a lot of snow on the trees. Really REALLY hoping to get snow in the next week or so before they turn the lights off. 15mm @ f11 and 6s. 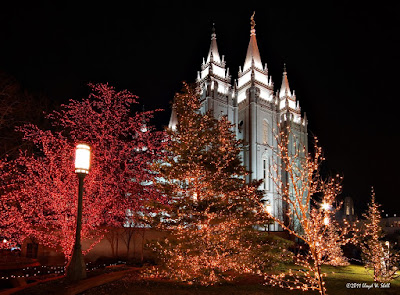 This is a fairly commonly shot perspective, though often from 25-30 feet further back. I love the dominance of the Red tree on the left, giving way to the light of the temple on the right. The stillness and peace of the enduring light vs. the movement of the masses below. 15mm @ f11 and 8s. 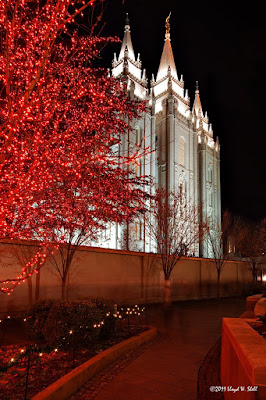 While I like this shot, I am not really happy with it. Despite being an HDR, I still have too much highlight loss on the temple. The overall composition is pleasing but I am not completely convinced that I cannot do better. 70mm @ f9.5 multiple exposures. 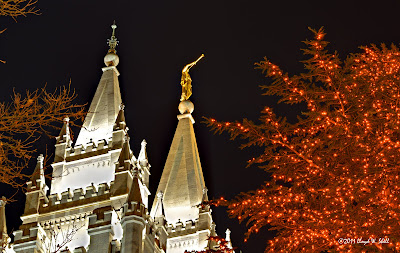 I shooting through things, to make something familiar almost abstract, it is hard to achieve, which makes it worth trying. Don't believe I was truly successful. However, it is pleasing to me... so there! 170mm @ f9.5 and 4s. 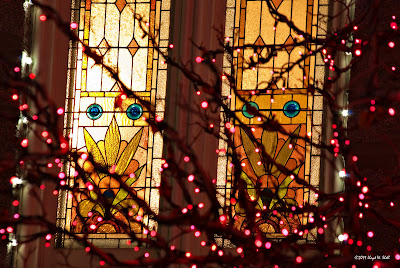 This shot of the same window pleases me more I think. I really need to repeat it in the spring when the tree is blossoming and the sun is just rising. 55mm @ f6.7 and 3s. 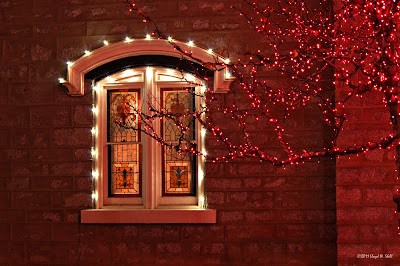 I was itching to get my Fisheye out, but I am not fond of the distortion for architecture. This works for me though, mainly because it allowed me to get into a tight spot and make an interesting shot. 8mm @ f9.5 and 20s. 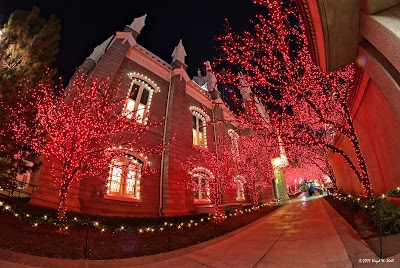 This shot is really my piece de resistance of the evening. I printed a similar shot, for a friend to give to her daughter earlier in the year, but it was pushing the resolution of my sensor a bit. I zoomed to 20mm and shot 9 shots (3 columns across and 3 rows down) giving me a file with the resolution of 6250 x 5000 pixels or 31 megapixels. Plenty of resolution to print this guy BIG!!!!
20mm @ f11 and 4s. 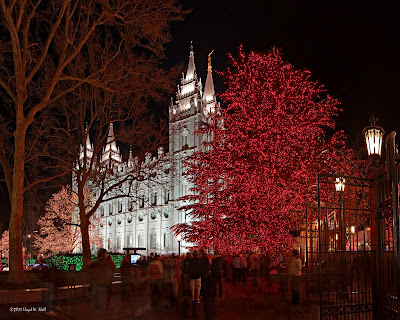 I hope you enjoyed my photos and maybe getting a little more of the technical side of what I was thinking. Merry Christmas!
Lloyd
Posted by Lloyd at 4:25 PM No comments: