That was the phrase going through my mind Friday night. It may have been the cold, it may have been that there was a lot of bare rock that I was looking at. All I know is it was kind of annoying really.

So, I went to my usual favorite place, Goblin Valley State Park last Friday. I know I need to branch out, but I keep telling people about it and they want me to take them there. My bad I guess. I was worried that it would be cloudy, as it was cloudy in Salt Lake but the night was pretty much clear as a bell. No moon until later so it was a nice night for Milky Way shots.

On a technical note: ISO 3200 is a starting point with your lens wide open and 30s exposure, beyond that, you just have to play with it and look at your histograms closely. And a really steady tripod.

Two airplanes and the Milky Way in the sky, lit up tent in the foreground. Works for me! 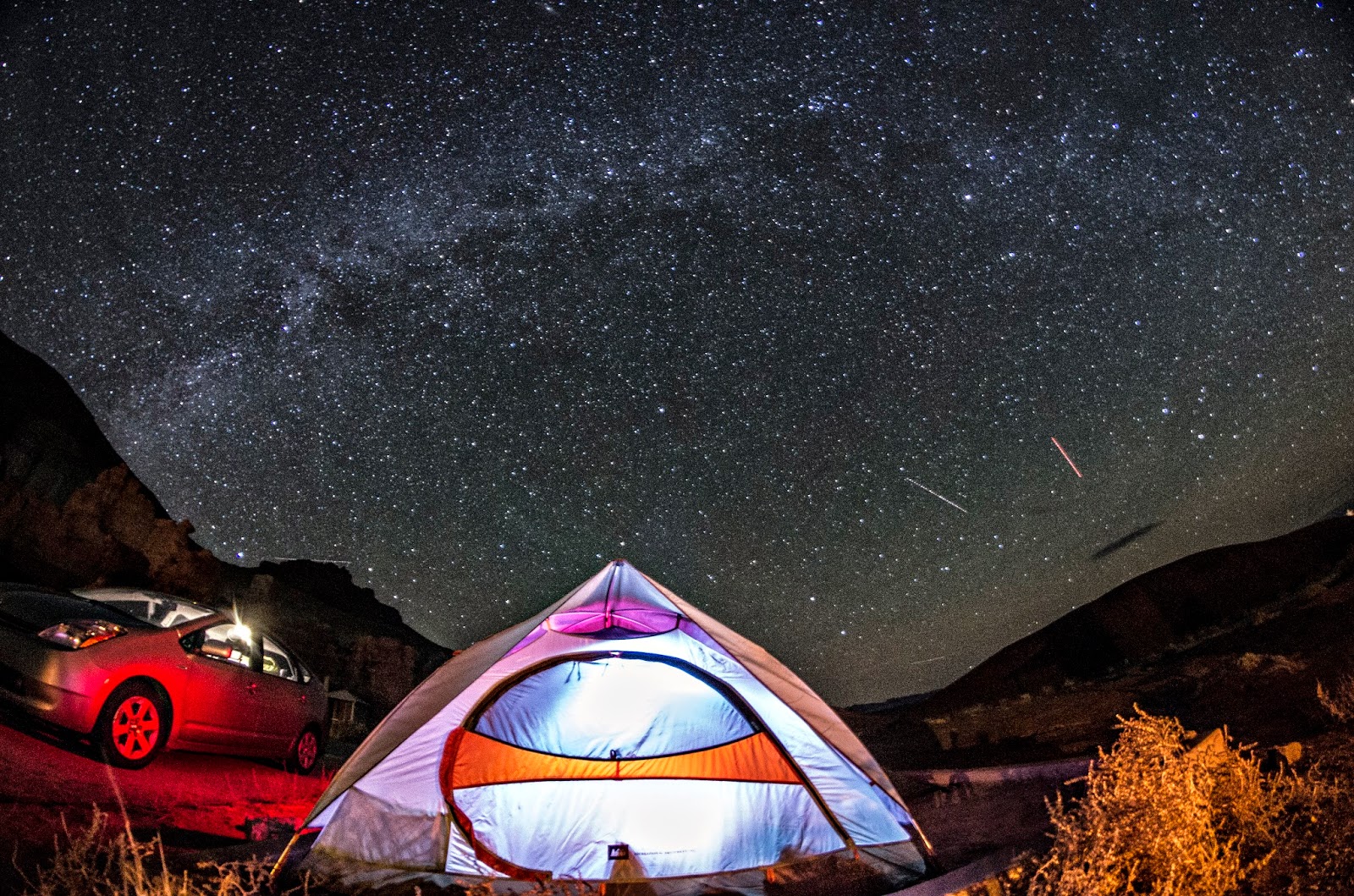 I am not a huge selfie fan, but I hardly think this is your usual selfie. I was trying to stay warm more than anything else really. 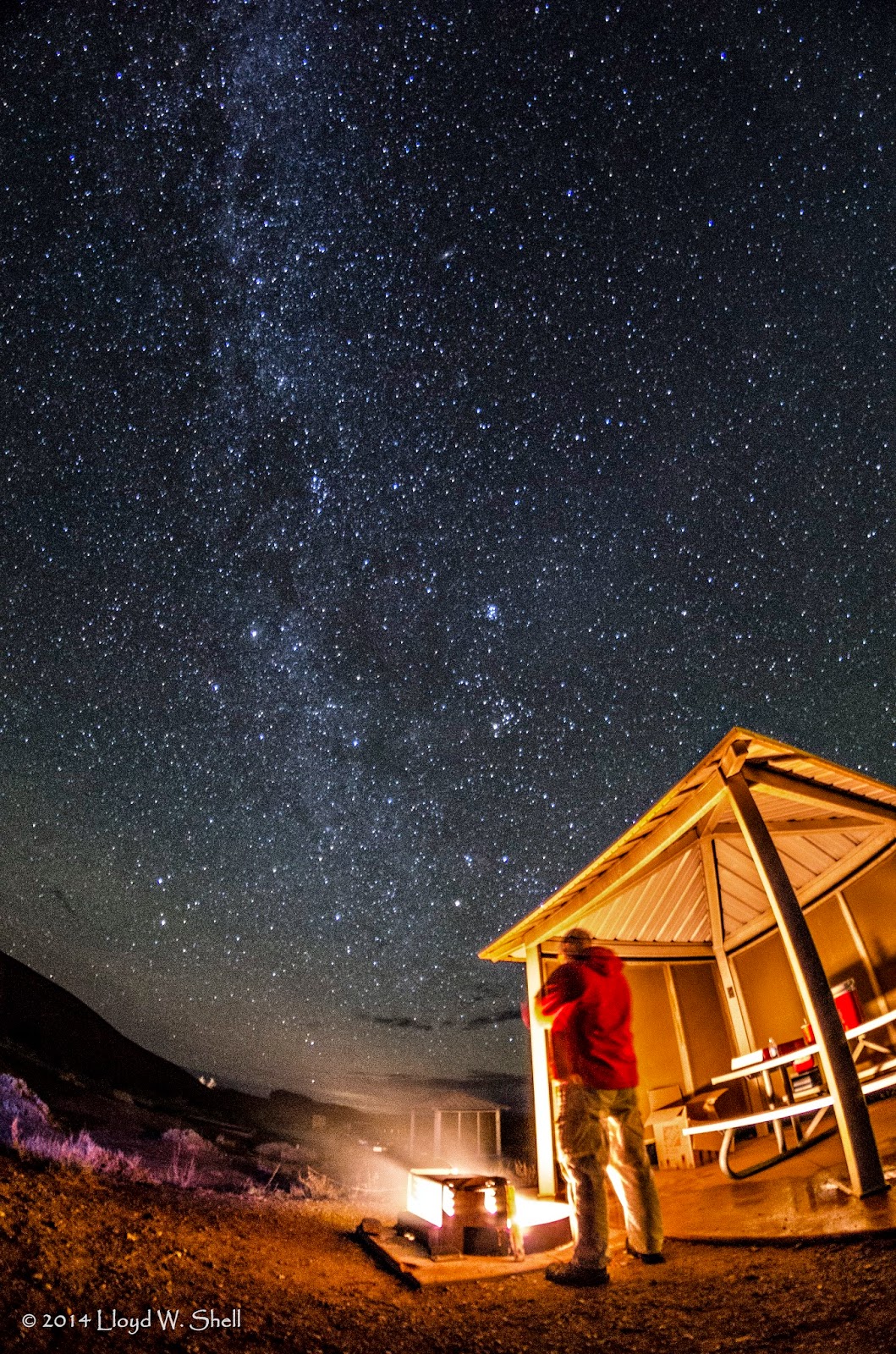 For these next three I did something interesting, I went from a 8mm Fisheye with 180 degrees of view from corner to corner, to a 17mm lens wide open at f2.8, and, with this shot up to 6400 ISO I got a lot more noise AND a lot more star activity in the sky. 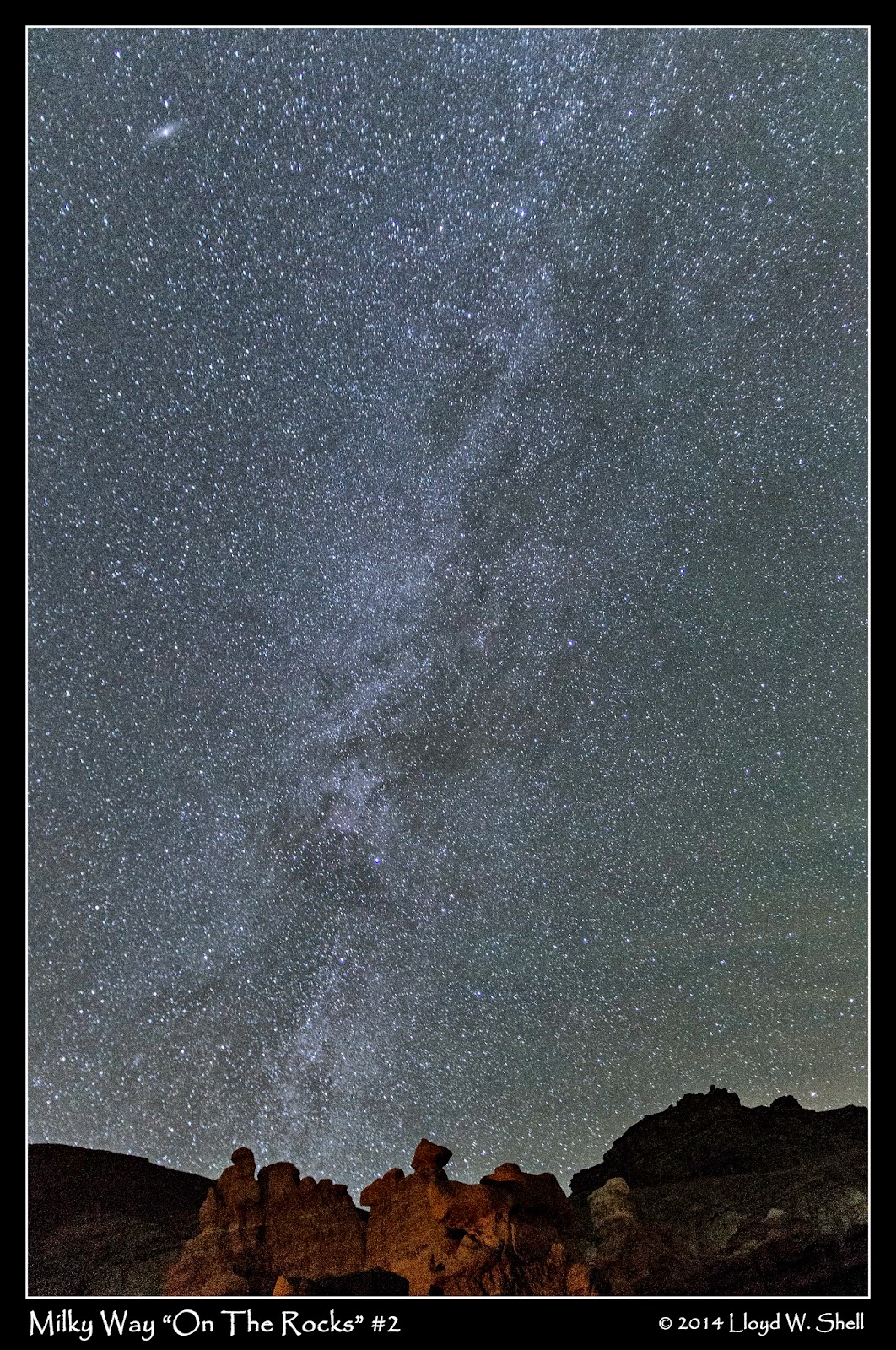 Going back to 3200 ISO I started working on my light painting technique. Using a simple headlamp, a Black Diamond Storm if you care to know. My first attempts put WAY too much light on the rocks, a nice problem to have.  Eventually I figured it out, of this framing, this was the best. 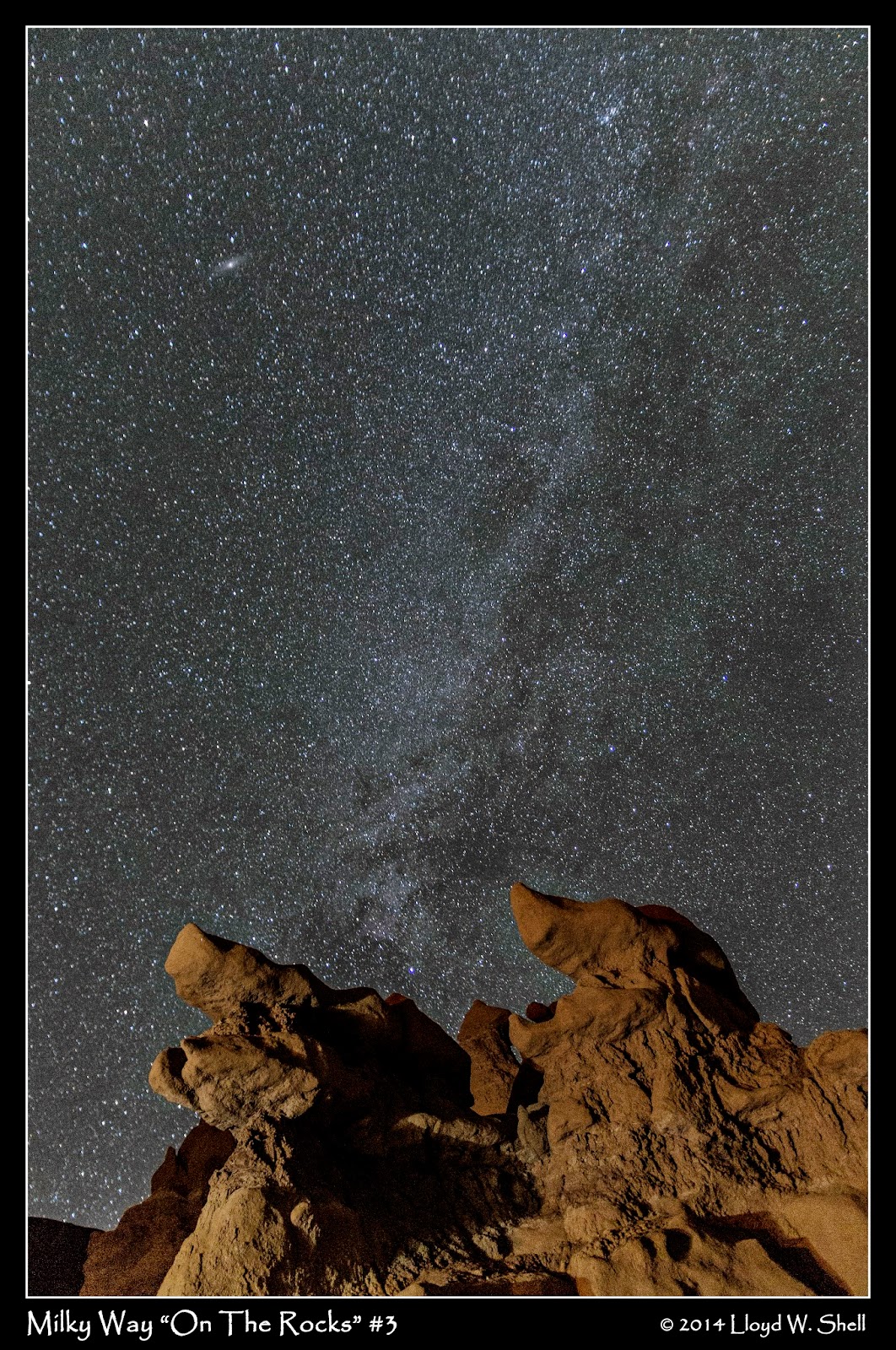 Now this was quite a bit more difficult, if you noticed above the rocks are not as well lit as below, which is OK, the problem becomes getting the sky looking right and the rocks the right color. I solved this by creating two layers in photoshop and color balancing the top layer correctly for the  rocks, then making the under layer correct for the sky. I then erased the sky from the top layer leaving only the foreground rocks (not as easy as it sounds) and then flattened them down. Leaving me with this. I am excited to try to print this and see how it looks. Could be a good one! 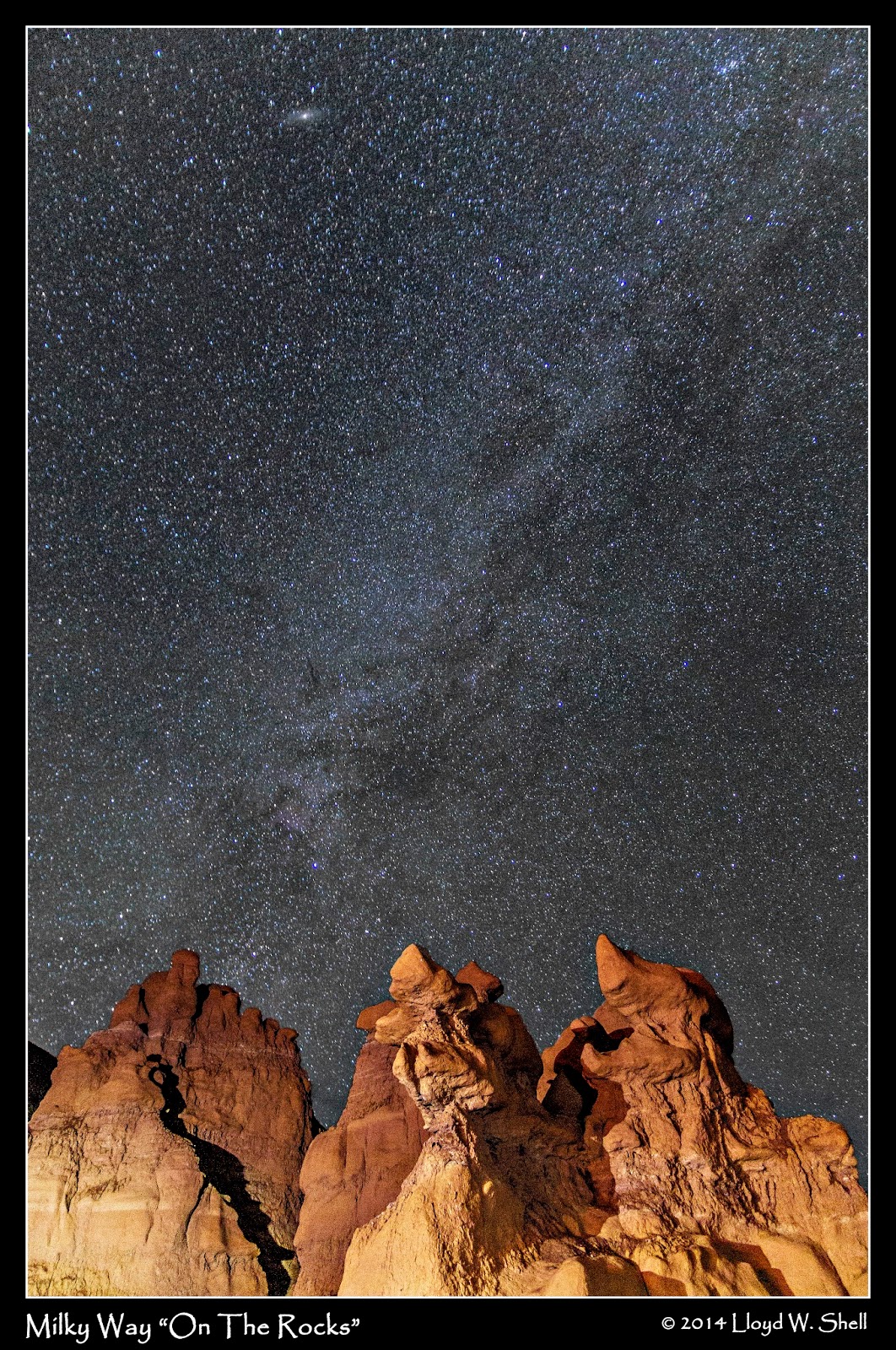 Early the next morning, I woke to frost on the INSIDE of the windshield, and the light just staining the sky to the east. The temp was in the mid to upper 20's F, and I am prepared enough to be able to shoot in those temps. In fact I was too hot by the time I hiked down to the valley of the goblins! Nice problem to have if you ask me.

While hiking down my old friends the "Three Sisters" were standing vigil off the side of the road. Took a picture to say "Hi!" and kept on hiking so I could be set up for first light. 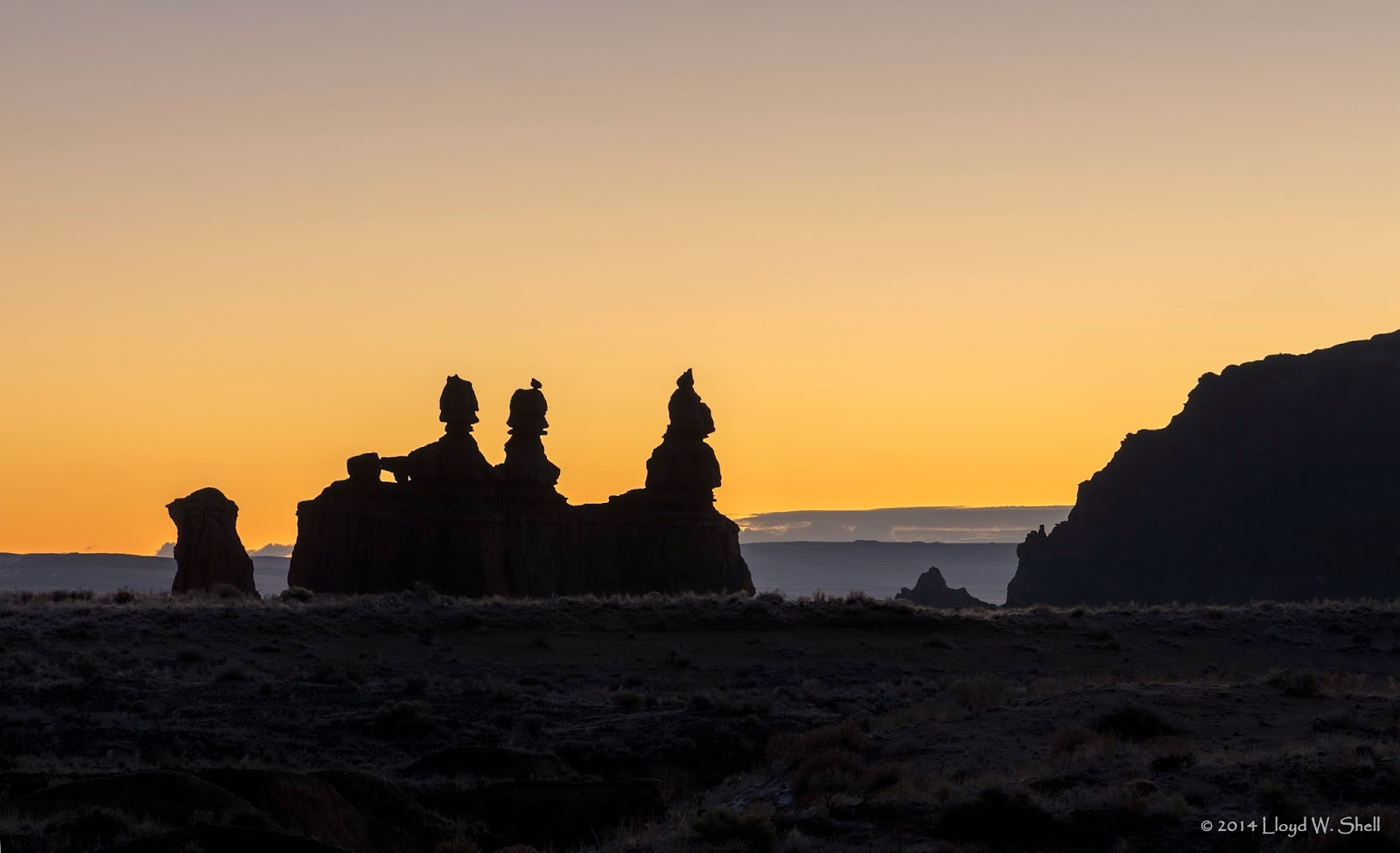 This would work better as a sunset shot, I had to work the HDR route to get the sky and foreground to talk to each other. Loved the frost and snowy spots. Moving back up I began to search for the perfect first light shot. This is one composition I really liked, but I began to realize that a butte was going to mess with my light. sigh. 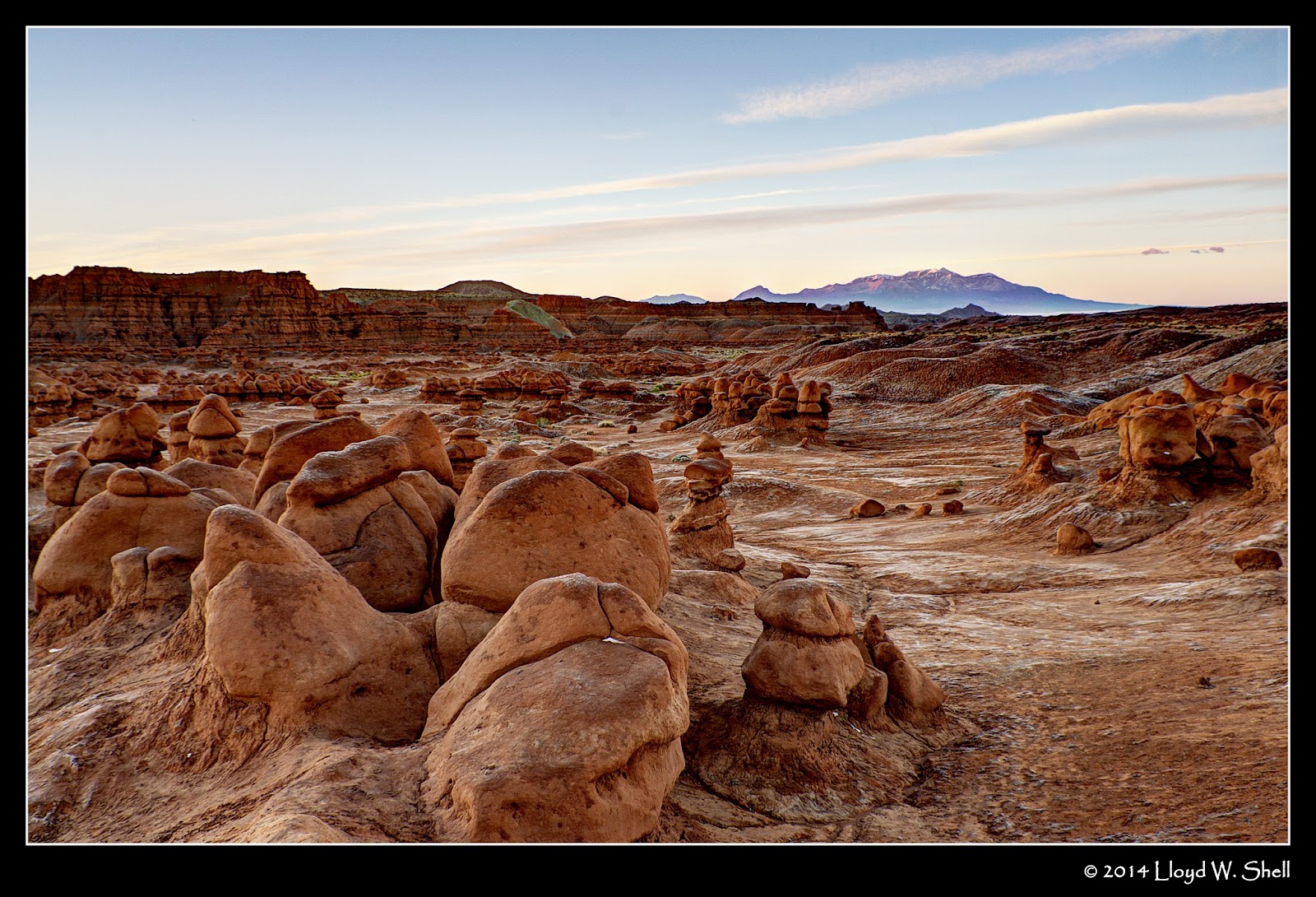 Moving up higher, Molly's Castle was starting to get light so I quickly set up for it, REALLY liked it. 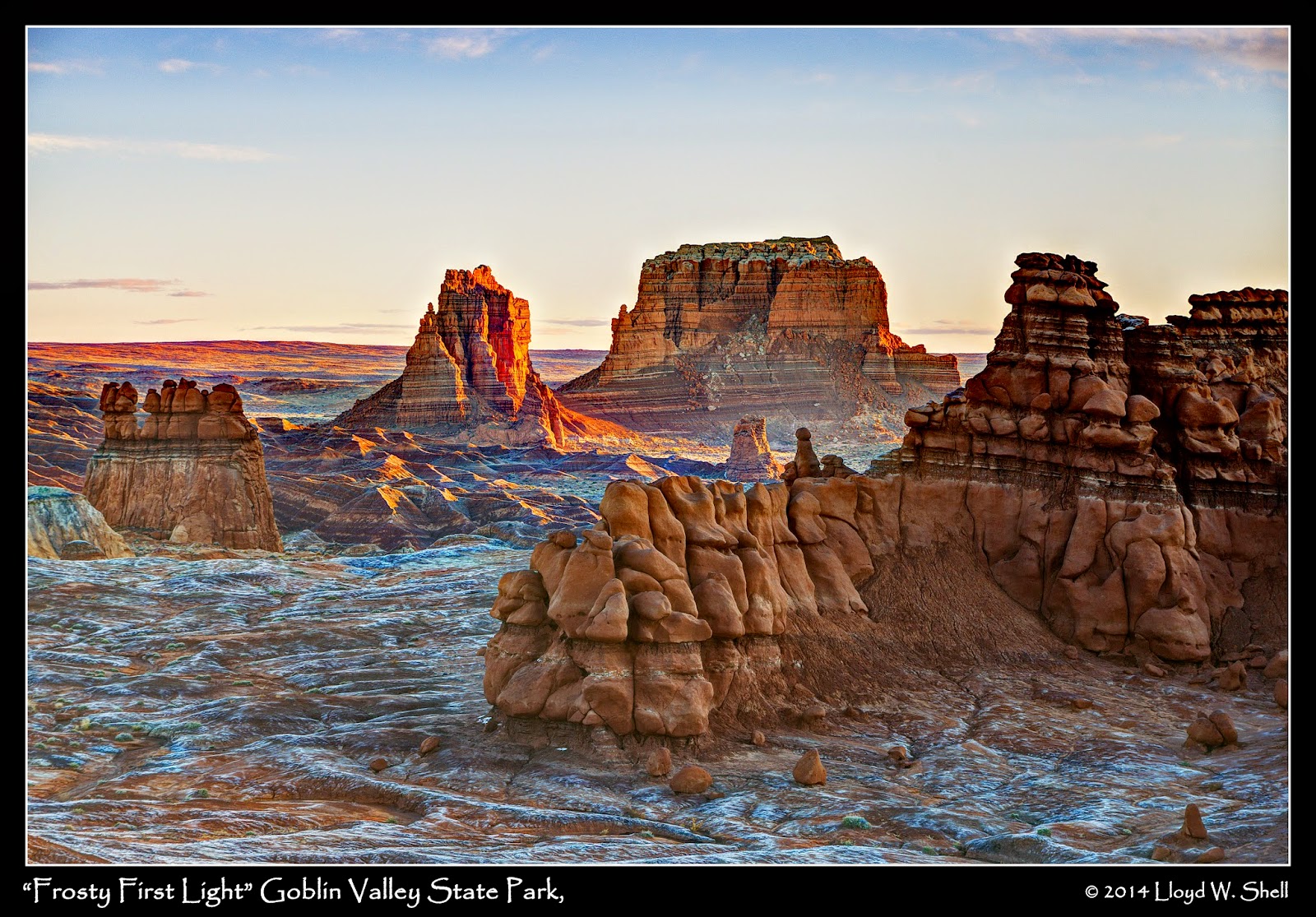 Turning around and moving 30ft I set up for "The Shot" I have wanted to get the Iconographic shot the epitomizes Goblin Valley. I think this is close, I again had to go the 5 shot bracket and HDR technique to get the light balanced properly. I think I avoided the really outre HDR look, and kept it natural. What do you think? 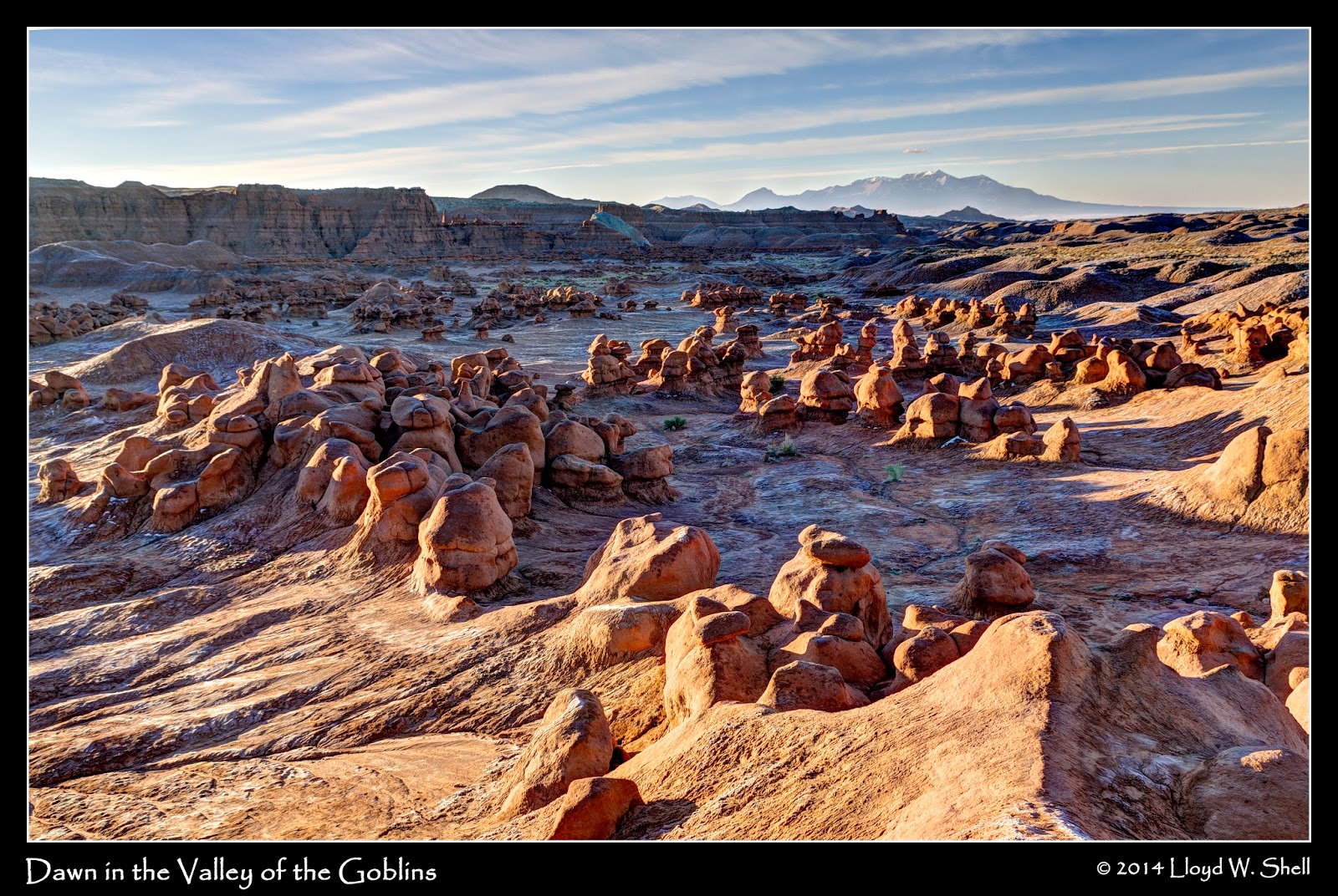 Thanks again for coming to look, enjoy your Thanksgiving Holiday!
Posted by Lloyd at 7:36 PM No comments: