Shooting in the Hood

I was recently asked to shoot some promo photos for my neighborhood. That is part of why I was quite absent from my blog and posting a lot of things. I was too busy working on this stuff! I shot on multiple nights and in different locations. And had to process all those photos too! I will be presenting a few favorites of mine that were not purchased by Daybreak along with more verbiage than I would normally use. In an attempt to explain what I was aiming for in composing the photos.

This was an unusual thing for me to take pictures to try to meet my perception of what others wanted rather than just shooting whatever caught my eye. I really don't know how successful I was really, they did choose many photos but not the ones I would have chosen as my favorites.

Like this one: I just love the light on the metal man and the color in the sky. Maybe I could have included more of the people around it, but the shadows made it hard to bring them in. Maybe I just like the top 1/2 of it? This is why I try to not fall in love with photos, just because I love them doesn't mean others will. 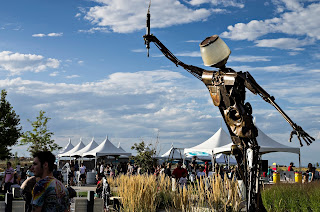 I wanted to capture a sense of movement and excitement in the crowd. Panning to follow a subject with a slow shutter speed allowed me to control the amount of blur and how many of the people could be seen well enough to be identified. That is always a consideration, will somebody get mad if they can be seen in a picture? 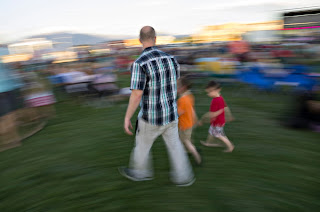 I like the fun fountains and stuff for kids to play in, again a slow shutter speed blurs things intentionally. 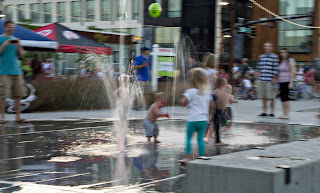 The cheery warmth of the light in the store, the people, the bikes. What is not to like? This shot required my tripod as it was getting darker. I really am much more comfortable with small apertures, and tripod and a remote release in my hand. 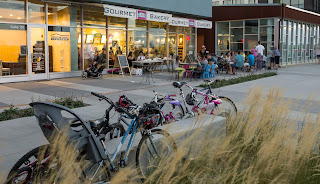