Shooting the Pentax 16-85 on a tripod (Finally) and some COOL Temple Photos!

I would have to say that one of my primary focuses in photography is/are LDS (Mormon) Temples. They are beautiful buildings, often in scenic locations, and often they produce images that I can sell.

This temple was built close to where my father and his brothers and sisters grew up. I have wanted to photograph it since it recently opened and finally got my chance. It was also the perfect chance to really test the sharpness of my new Pentax HD DA 16-85 f3.5-5.6 DC WR lens. (Sheesh what a mouthful!) I can never truly see how sharp a lens is until I use it on a tripod with cable release and focused with live view. After looking at these images... it is just plenty sharp! And the colors aren't half bad either! I had not planned to shoot from this field nor did I know it existed having only been to this temple in the dark before. It certainly caught my eye as I drove up though. I caught the good light just before sunset, and the field was just the right color. 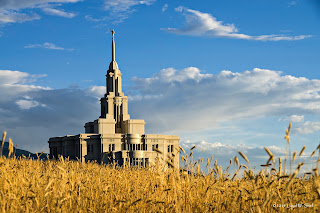 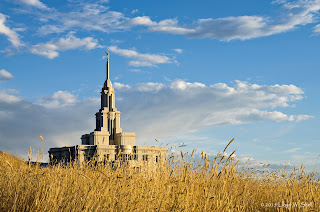 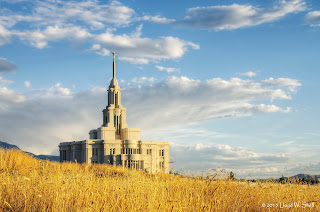 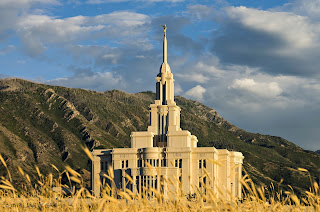 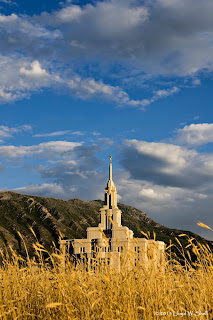 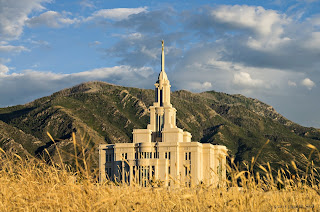 After working my way through, over and around the field, I headed out to the west side of the temple to catch the last light on the clouds and shoot directly to the side. I hate trying to make buildings straight and level when I am at an angle, it just never seems to look quite right. Shooting straight on means I only have to correct perspective and level the dang thing. MUCH easier.

Both of these are HDR shots, processed in Photomatix. There was no way to get a lit temple and the much brighter clouds in a single exposure. Just not happening. I left just a little bit of the perspective distortion uncorrected, if you get it exactly square, the buildings look just a bit off. 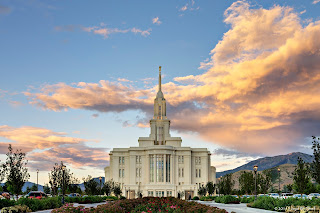 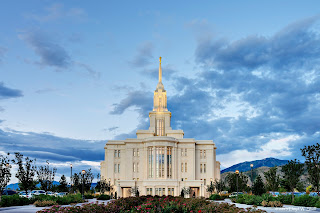 I hope you enjoyed the photos!
Posted by Lloyd at 7:51 PM No comments: