I bought this lens a couple of years ago for when I needed three things:

I had two of the three with an old manual focus 50mm f1.4, but it needed a certain amount of stopping down to really be sharp and focusing at f2 or 2.8 manually is really HARD! So, I saved and looked and found this guy used on KEH.com, the DA* 55mm f1.4.

The reviews were good, and I felt it was the best choice for me. It has really taken me time to get to know it, I normally won't walk around with a lens of this focal length on an APS-C camera as it is a little long so I haven't used it as much as I might have wanted to. A few portrait sessions, and a couple of walk arounds is all.

I do love the lens though, and feel like I need to use it more to really find out all of it's quirks. So I have been carrying it more over the last few days. Here I will show you a few of my recent shots, and talk about discovering that it is not a bad landscape lens!

I have a thing for thistles, always have, always will. So I had to jump the fence and shoot these while waiting for the train. Now, I normally don't stop this lens down more than f2.8 or 4, what is the point of having a fast lens and stopping it down? But... for this type of shot I needed at least a little depth of field to work with. So I manned up and cranked it to f4.5 eeek! Probably should have stopped it down more, but oh well. 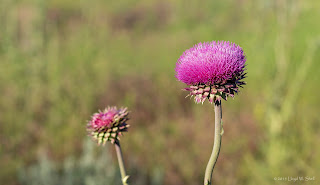 Noticed a nearby flower with a neon green spider, now this lens is NOT a macro lens in any way shape or form, but I turned it to closest focus disengaged the AF, stopped it down to f9 (!!!!!!!) just like when I am going all Macro and tried to not sway much. Even stopped down the DOF is pretty small that close up. It took a few but I got spidey reasonably in focus and was about to go catch my train. Then I noticed a little friend, do you see him? 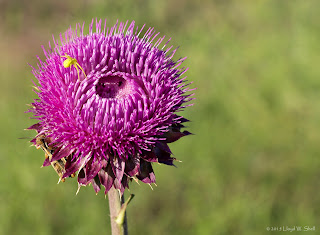 Train was still a little ways away, so I got to capture my grasshopper friend. Do they eat spiders? Do spiders eat them? 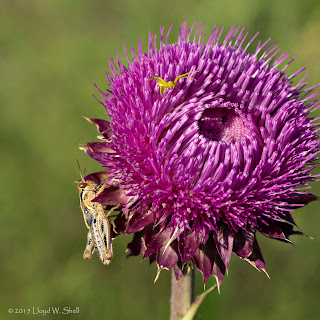 Moving around I hoped to see an epic battle or something... Not to be, they just sat there. This first one is a crop of the one below with a little rotation. Not quite 100% but fairly tightly cropped. Couple of things to notice. This thing is really quite sharp, even at f9 where I would expect to be seeing it starting to soften a bit. 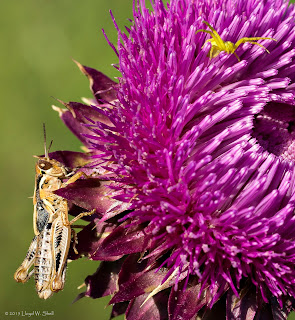 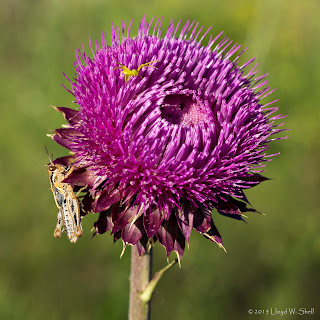 Then the train came and I had to run...

Then, after work the next day, still carrying the DA*55 I got to walk home from the light rail to my house, along the shore of the lake by my house. Say what you will about Homeowners Associations etc... the fact that having one means that I have a beautiful lake to walk around just blocks from my house, that, THAT is cool!

That said, these daisies were right in front of my work in the shade. but I got them... at f2. Yep f2. Nailed the focus, yummy! Not that I recommend shooting flowers at f2 on a regular basis, you will miss a lot of shots because both you and the flowers will sway and your tiny plane of focus will be off. 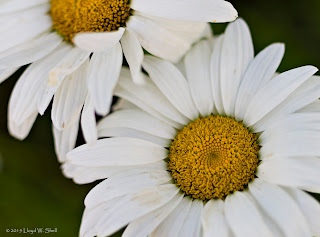 Never thought I would shoot a landscape at f2 either but I did here. This is the aspect of the lens I really wanted to play with more, to create interest with shallow DOF, yet to still place the subject in it's environment. 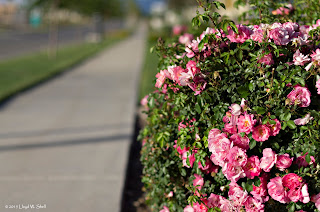 I actually kind of considered this a failed shot when I looked at it in camera. I now don't think it is awesome, but I do kind of like it. The background out of focus areas are nice and dreamy. 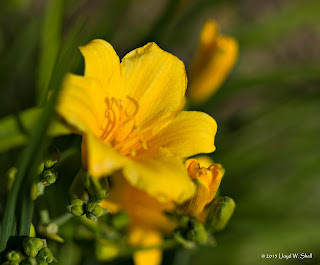 Now, as a landscape shooter mostly, I am usually at f9 or 11 and just live there for maximum depth of field. Screwing my my courage I cranked it down to f9 again for some shots I wanted to add to my portfolio for real estate folks to use on their web pages. 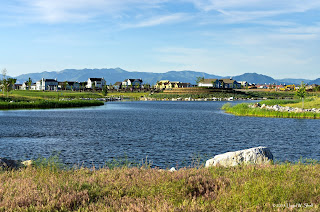 Sir, your bench is waiting. 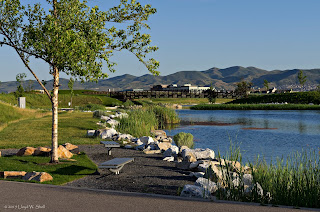 I love the outside of this house, the interior is so much wasted space... sigh... but I love walking past it. 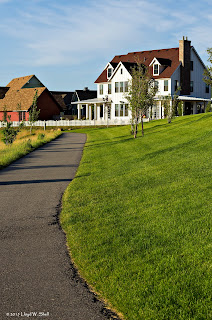 I honestly could not choose between these two shots, so you get to see both. 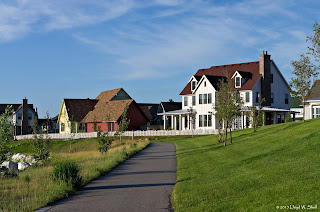 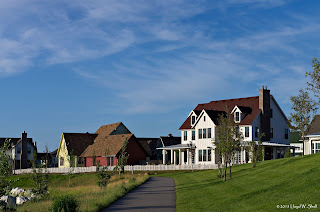 Now, here is where I get all excited about this lens. Fast lenses and direct sunlight coming into the lens tend to be a BAD combination. This lens has the Champion hood of hoods, and it does a very good job of shading the lens and preventing unwanted flare. Unless the idiot behind the camera point the lens at the sun and has it in or near the frame. Amazingly it did MUCH better than I expected. I guess having it be a prime with fewer glass air interfaces rather than a zoom with many more helped. I don't know, but I doubt this shot would have looked this good with a zoom. 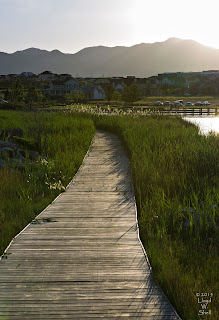 Or this one either. 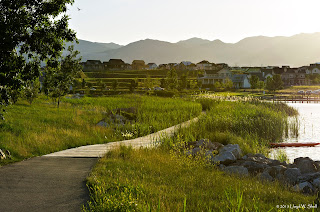 Dropping back to f3.2 for this last shot felt like a relief, reduced DOF but just enough. 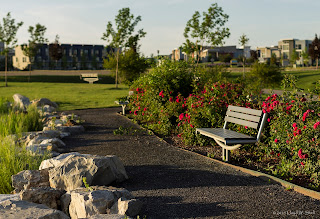 Now, this lens is not without it's flaws, it will occasionally hunt on my K5, I think because it has such a thin Plane of Focus when wide open that the camera just zips past especially if there is not a lot of contrast. And I had to calibrate it to reduce the back focusing it demonstrated on my K5. But, in all honesty I doubt any other lens would really do that much better, if any lens would.

This bad boy will forever be in my bag.
Posted by Lloyd at 10:20 AM No comments:

As I have mentioned, I have a busy life. Sometimes the only way I get to indulge my photography addiction is to try to always have a camera with me. Usually I have a medium wide to telephoto prime. This day I put my Pentax SMC 200mm f2.5 lens on to carry with my K5. While not the sharpest lens ever, it is good for killing bears and lions if any attack you. Which cannot be all bad can it?

The weather was a bit crazy walking home from Light Rail, which is my favorite kind of weather, it makes the sky interesting. See: 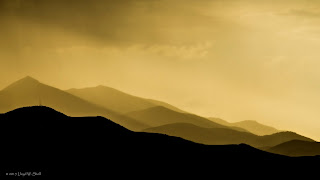 The other advantage I find with walking about with a telephoto instead of a wider angle lens is that I start to pick out details of a scene rather than something as part of a larger scene. I guess I "See" differently. Would not have gotten this shot without looking the right way. 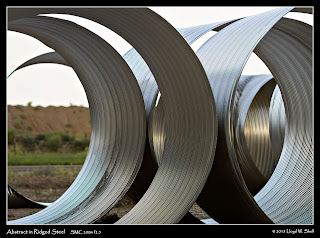 It can be restrictive to only have a telephoto, but photostitching can make up for that.

You can still have the ability to place objects in a scene, but you need to frame carefully, and stand a long way away. 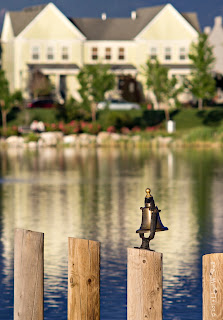 Not sure if I like this one or not. Think I do. 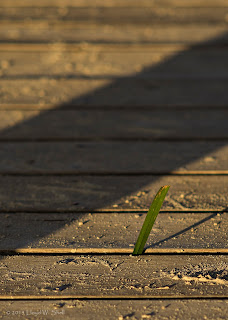 Looking up the sky was clear, except for the stupid airplanes. 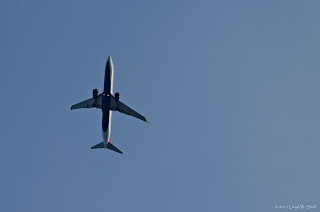 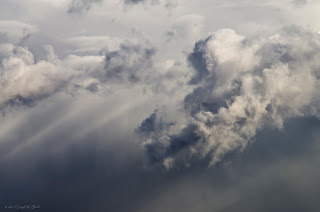 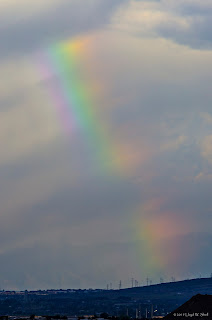 Bet you haven't read all the way down to here. Leave me a comment if you did. 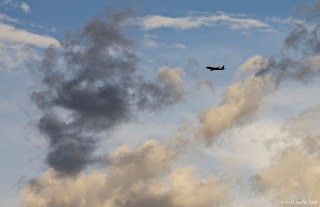 These last three are panoramas, which I ended up liking quite a bit. The technical challenge is fun, and the results are too.