After a fabulous evening at the Sego Canyon Petroglyphs & Pictographs, we found a place to park the car nearby and sleep the night away. Now, I normally would be up in the night taking star trail photos and playing with light, but... I was tired. So, I slept fabulously in anticipation of a great day of hiking on Day 2.

But first I really wanted to get the morning sun on the canyon decorations. I have long had an appreciation of the art of the ancients. These people had pretty much NOTHING, survival was a chancy thing on a day to day basis, yet they took the time to create this art. Nobody knows what it really means, and man some of the figures are pretty funky!

This panel is my favorite, I had to angle the image a little to make it fit like I wanted, but I am OK with that as to me it adds a little feeling of being "off" to the image. And really the whole series of images are off. These are pictographs as they are painted on the rock. They are "Barrier Canyon Style" which could be 1500 to 4000 years old! It just amazes me that these things have lasted so long. The most fun I have had in a long time involves spending time trying to figure out just what the heck these figures represent. My wife says it was bored teenagers screwing around and painting graffiti. I'm not so sure...

This guy certainly looks like an alien, I bet there are a few people who live for certain shows on the History Channel that could go on for hours talking about these things. This guy is currently my profile picture on Facebook. Is that thing over his left shoulder a UFO with exhaust shooting out? ;-) 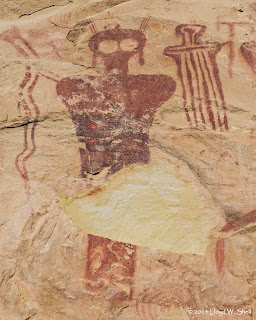 This shot exists solely to show my two favorite things in southern Utah. Sandstone and blue sky. Just looking at it brings peace to my soul. 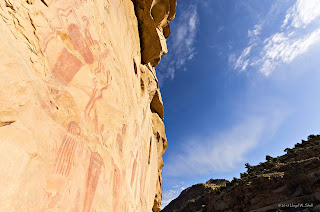 The town of Thompson Springs, on the way out from the pictographs, is fairly small and falling into disrepair, that usually equals nice photographs. I didn't have the time I wanted, due to 9 year old attention spans. However, I have this place on my list of places to photograph again, at night, a dark night, while playing with flashlights. 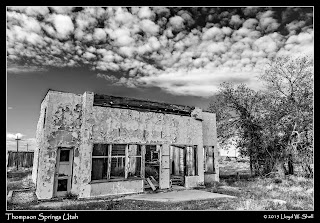 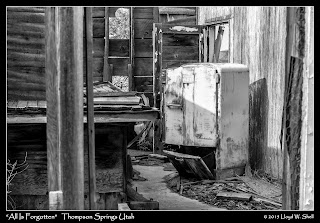 In a bit of a hurry to get a parking spot at the Delicate Arch Trailhead, we buzzed down to Arches and found plenty of room, and got ready for a first for both my 9 year old and myself. Somehow in my 40+ years I have never taken the opportunity to hike Delicate. Why I don't know, but I haven't. One thing concerning me was trying to take something original in composition. This thing has been photographed every which way imaginable. It was a challenge I had been thinking of since I planned the trip. Trying to think outside of the box I decided to go crazy and take my Fisheye and my Sigma 17-70 and just wing it.

When you get there you will be impressed with how big it is. Sometimes these things just aren't as impressive in real life as in photos. Photographers being what they are, distorting reality etc... This is not one of those things. It is even more impressive in reality. There were about 5 trillion people up there which makes me irritable, I really don't like crowds. Everybody was pretty agreeable though, which helped when I decided that I had a new angle. It took a few minutes of waiting to get to be next in line, and then explain why I needed people to back up a little, but eventually I got their co-operation and literally laid down on my back to try something.

I took 20 shots in a very brief period of time, I had promised to be quick. (4 compositions of 5 bracketed exposures, always bracket when you are unsure of your exposure even if you are not going to use HDR, it just may save your butt!) Of those 4 compositions I liked these two the best. 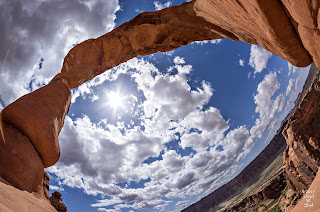 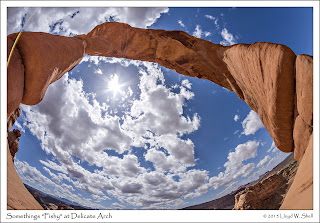 It was amazing to me that a lens covering 180 degrees from corner to corner could not quite fit it all in!

Walking back, the distortion of the fisheye makes Delicate look small, but believe me it isn't! 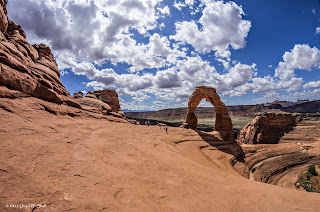 Had to shoot this guy, he posed for me, quite fearlessly too. Too many people around him I guess. 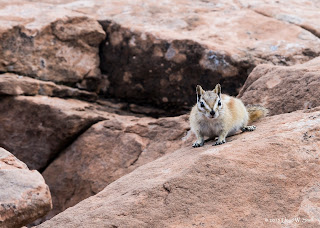 I hesitate to put this one in, I love the texture of the sky, but it is too busy. Can't help myself though. Sorry. 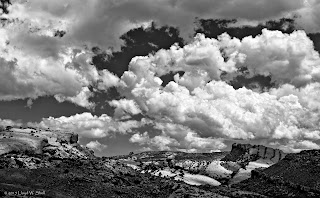 Double Arch has always been a favorite of mine, not least because of it being featured in the opening sequence of "Indiana Jones and the Last Crusade" This thing is truly massive! This shot at 14mm makes it look smaller than it is. 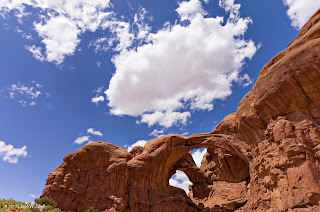 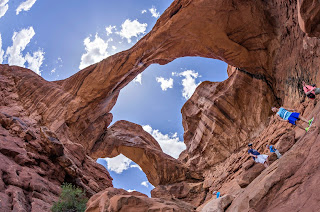 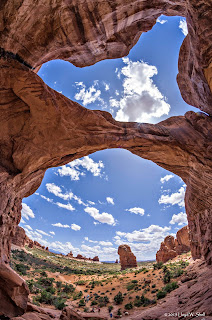 Despite being a rather inexpensive lens, the sharpness of the Rokinon 8mm is more than acceptable, I do wish it had an odd number of blades to make for better light rays. 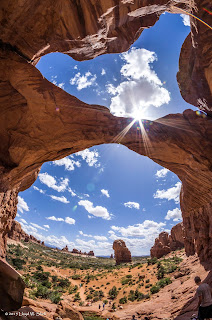 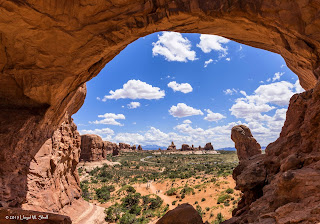 By this time my poor child was tired, and needed some down time. So we headed into Moab, bought some ice and firewood, and drove up to Dead Horse Point State Park & Canyonlands National Park. You really cannot do these places justice in an afternoon, but an afternoon was what I had.

At least the clouds co-operated and gave me some textures. Usually the 50 mile visibility and severe clear skies make it difficult on me. On this trip I gladly exchanged clear night skies for beautiful days, and a little rain. 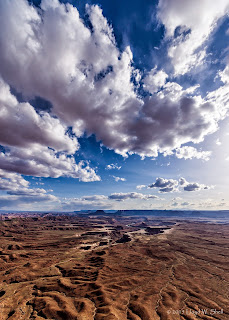 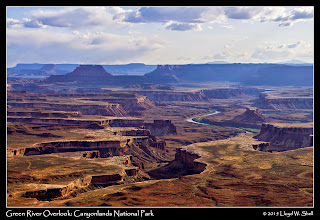 I did make the mistake of not using my tripod to shoot, just lazy I guess, it makes these panoramas just a bit less sharp than they could be, but you have to have the full resolution photos to see it. The light was just magical though. 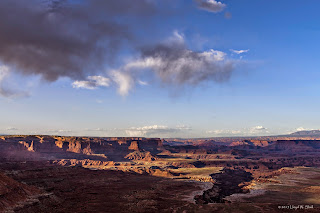 I thought I was done, but I noticed the haze building and this scene from the road, I parked in a pull off and ran gingerly over, close to but not over, the edge. I first saw this photographer and HAD to take a quick shot of her.

This is what she and I were looking at. Awe inspiring to say the least. When I got home this was the first image I processed. Unhappy at the lens flare I set it aside and after a few days started semi methodically working my way through in chronological order. 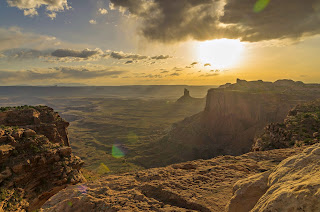 When I returned to this shot, I knew I had to remove the lens flare and I really felt I had gone a bit overboard with my white balance in the direction of too warm. So I processed the three lowest exposures in my bracket. Which included the one above as the "Middle" exposure. Changed the white balance a little, blended them in Photomatix and set to work cloning out the parts of the lens flare I didn't want. You will have to tell me what you think, I am not sure I have it perfect. Close though. 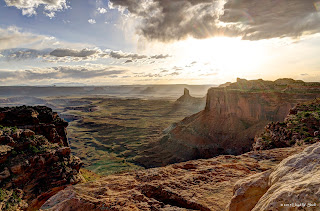 Another more telephoto view. I really didn't want to stop shooting. If I had my druthers (whatever druthers really are....) I would have stayed there for an hour or two to shoot the sunset. Sigh.

This was my last series, I used slightly different settings for the HDR. A little warmer WB too. Too many choices, and there is no right or wrong answer. 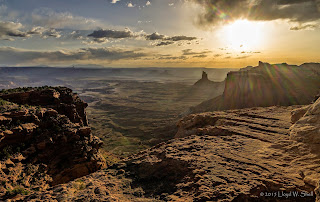